Simultaneously with the opening of Na+ channels in heart muscle, slow Ca2+ channels allow Ca2+ from the extracellular space to slowly diffuse into the muscle cells. This Ca2+ triggers further release of Ca2+ from the sarcoplasmic reticulum. In skeletal muscle cells Na+ channels close instantly after depolarisation. But in cardiac muscle cells depolarisation continues after Na+ channels have closed. This is because Ca2+ slowly and continuously diffuses into the cells (due to the presence of slow Ca2+ channels). The sustained diffusion of Ca2+ into the muscle cell creates a plateau in the action potential, and as long as Ca2+ diffuses in, the depolarisation and subsequent contraction persists. Simultaneously as Ca2+ diffuses into the cells, there is only minimal diffusion of K+ (potassium) out of the muscle cell. The sum of these two processes of Ca2+ and K+, explain the sustained depolarisation of the heart muscle – the plateau. When calcium channels close and potassium channels finally open, the cardiac cells repolarise. 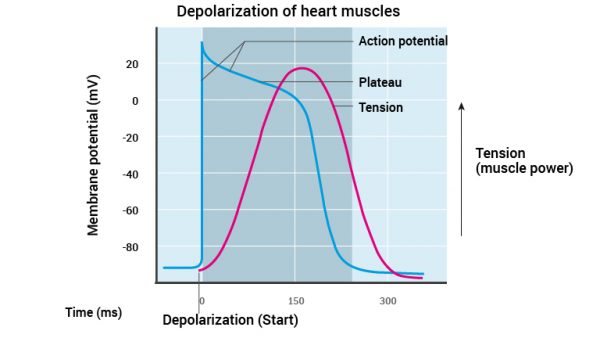 Note from Figure 11 that the power of the muscle cells increases during the plateau. This is explained by the persistent depolarisation and increased amount of Ca2+ in the cardiac cells. The myofibrils (actin and myosin) have time and enough Ca2+ to form many bonds giving more power.

The muscle contraction where myosin slides on actin is identical to skeletal muscle physiology. The following is therefore a brief review of this process:

Prior to the binding of actin, the myosin head has bound the energy molecule ATP and cleaved it into ADP and a phosphate group, an ATP has been metabolized. Both ADP and the phosphate group are still attached to myosin whilst attaching to actin. When myosin binds actin, the phosphate group is released. This causes a change in the myosin’s three-dimensional structure causing the head to bend, and the actin filaments move in a longitudinal direction. Then ADP is released. Once this is done, a new ATP will bind the myosin molecule, releasing its connection to actin. ATP is cleaved to ADP and a phosphate group and the myosin head achieves its original three- dimensional structure. Restarting the cycle where myosin can bind actin in the presence of calcium. 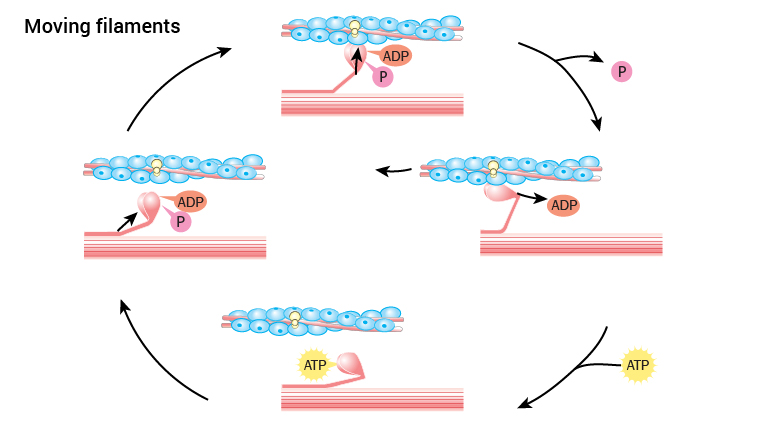