Pacemaker cells are cells that generate electrical impulses (action potential) by themselves. The impulses are generated with a certain rhythm, creating the heart pulse. Thus, in contrast to neurons and other muscle cells, the pacemaker cells need no external stimuli to depolarize.

If the spinal cord is damaged, in the upper cervical region, mechanical help may be needed to keep the lungs oxygenated. Yet, the patient’s heart may keep beating without external stimulus. The nervous system does not need to trigger the cardiac contraction. The nervous system regulates the heart’s rhythm and contractility.

One of the characteristic features of pacemaker cells is that they have specialised ion channels in the cell membrane which continuously and slowly leak sodium ions (Na+). Sodium diffuses slowly into the cell, leading to a slow increase in the membrane potential. As a consequence, at a particular limit, the threshold for spontaneous ion channel opening is reached. What distinguishes this depolarization from what we know in nerve cells and skeletal muscle fibres is that when the threshold is reached, it is calcium ion channels (Ca2+) that open. Almost immediately calcium ions diffuse into the pacemaker cells and depolarize them, creating an electrical impulse. 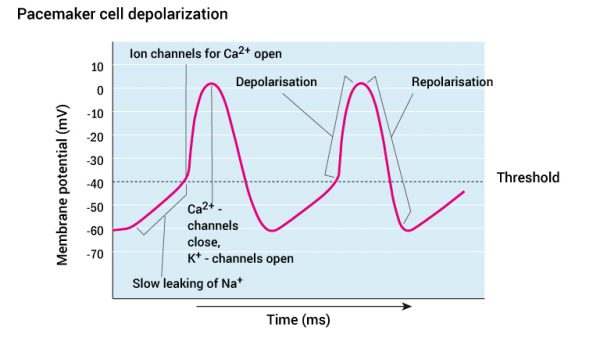 Depolarisation terminates when the calcium channels close and potassium channels open. When enough potassium ions (K+) have leaked out of the cell the membrane potential is normalised back to it’s resting potential. It is a relatively short-lived resting potential, because sodium (Na+) is leaking into the cells to further generate a new, spontaneous depolarisation and electrical impulse. We therefore get a rhythmic depolarisation of pacemaker cells, which provide rhythmic contractions; and a pulse.

Should the sinus node for any reason cease to function, it will be the AV node that takes control of the heart rate. Should the atria totally stop working, the heart will still be able to beat, because pacemaker cells of the ventricles takes over control. However, with a heart rate of 30 beats per minute the clinical management may be critical in such cases.

As mentioned, the pacemaker cells of the sinus node depolarise at a frequency of approximately 75 to100 per minute. This means that the heart has a heart rate of 75 to100 beats per minute. However your normal resting heart rate maybe around 50 to 60 beats per minute, the reasoning is that at rest the heart is under the constant influence of the autonomic nervous system that inhibits the sinus node. The nervous system can modify the pacemaker cells