Each muscle cell contains myofibrils and each myofibril is composed of hundreds of protein strands, the myofilaments. There are two types myofilaments :

Each  myofibril  consists  of  a  large  number  of  sarcomeres, the  muscle  cells  smallest functional units.

Each sarcomere consists of a Z-disc in each end and an A-band in the middle. Actin filaments attached to the Z-discs and myosin filaments form the A band. It is the repetitive A-bands that give the characteristic transverse muscle strips seen under a microscope.

The actin filaments comprise of several spherical proteins in long helical chains. They consist of the proteins actin, tropomyocin and a troponin complex. All these are essential for muscle contraction.

The myosin filaments are an accumulation of approximately 300 elongated myosin molecules. Each of these proteins has a head on one end.  The myosin head’s function is to bind and slide on the actin filaments that lie parallel.  As shown in figure 7 the myosin filaments are organised so that when they slide against the surrounding actin filaments, they draw each end of the sarcomere towards the other. I.e. the Z-discs are drawn toward each other and the distance between two Z-discs is shortened. The distance reduction between two Z-discs is minimal, however a myofibril consists of numerous sarcomeres in a chain which shortens simultaneously. Thus the whole myofibril contracts. As this happens in all myofibrils in a muscle cell at the same time, the whole muscle cell contracts and we get a coordinated contraction, cell by cell.

Inside the muscle cells there is a membrane which encloses the various myofibrils. This membrane is called the sarcoplasmic reticulum. The main function of this membrane system in the heart is to store and release calcium ions (Ca2+) into the sarcoplasm (corresponding to the cytoplasm in other cells). Thus the calcium becomes available for the actin and myosin.

Other membranes inside the muscle cell are known as T-tubules. T-tubules are tunnels of sarcolemma (cell membrane) that fold in  and meander around every single myofibril. In the figure you can see that they meander around the sarcomere myofibril Z-discs. T-tubules adjoin the sarcoplasmic reticulum. These T-tubules lead to electrical impulses (action potentials), in each sarcomere in a muscle cell (see explanation below).

The muscle cells in the heart have mo re mitochondria than those found in skeletal muscles. 25 to 35% of the volume of the cardiac muscle cells is mitochondria, explaining the high cardiac endurance. There is a lot of energy available, and it requires significant strain on a normal heart to produce lactic acid. Lactic acid is produced when the oxygen requirement of the muscle outstrips its supply and the cells are forced to produce energy without oxygen, known as anaerobic respiration. With numerous mitochondria, the cells can produce high amounts of ATP in the presence of oxygen, known as aerobic respiration, leading to high endurance.

Try Again!
Each
muscle cell
contains
myofibrils
and each
myofibril
is composed of hundreds of
protein strands
, the
myofilaments
. 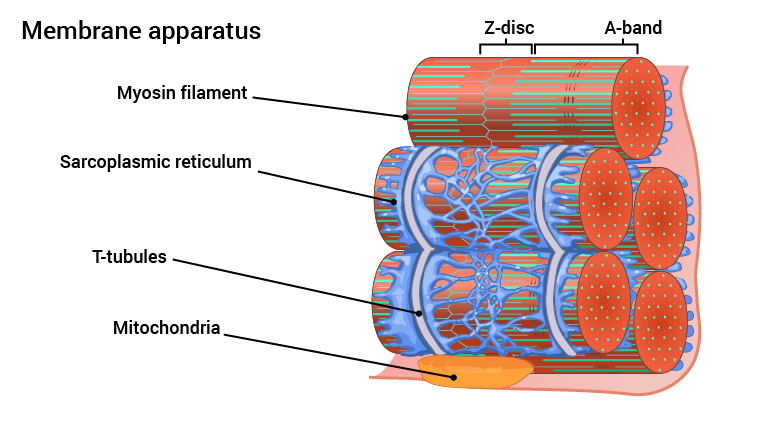